I’ve been living between Macau, HK, China and Taiwan for 30 years…the only Frenchman to date to have gone to a Chinese kindergarten in Macau! Isn’t that crazy?

When I was one year old, my parents decided to leave France and took me with them on their adventure to Macau.

They set up their business and I… went to kindergarten and then to a local Cantonese school from 5 to 8 years old, I was the only foreigner and when I came back home, Lego battles were in Cantonese.

I learned Mandarin at the age of 9 and had private English lessons and even though we spoke French at home, I only discovered proper French lessons thanks to the CNED, at the same age.

Back in Paris, even if I didn’t speak Chinese anymore or very rarely, I continued having private Mandarin lessons once a week.

We will pass the hectic Parisian life that we had living on a “Péniche” in the heart of Paris … we will also “swipe left” the fact that I got kicked out of all schools in France … haha!

In 2001 I got my baccalaureate as a free candidate and I left to Beijing right after, I went to study acting at the Beijing Film Academy (again I was the only foreigner who ever got admitted at that time), my Chinese “came back” and I became an actor for seven years (in TV shows, films, and a few series).

However, I decide to leave Beijing before the Olympics and flew to HK.

For two years, I wrote, produced, hosted and sold my own show called “Cantonese in one minute”, broadcasted on TDM (the local FOX!😂).

Later on I wrote a simplified Chinese method in English and French for local expats but I decided to leave a town that was too small for me, so I took a one-way ticket to Taiwan, where I created a French method for Chinese speakers that became100% online in 2017 and that is constantly updated.

About the method
Cantonese - Lesson I
ENROLL 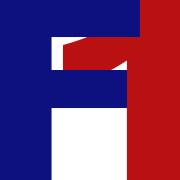